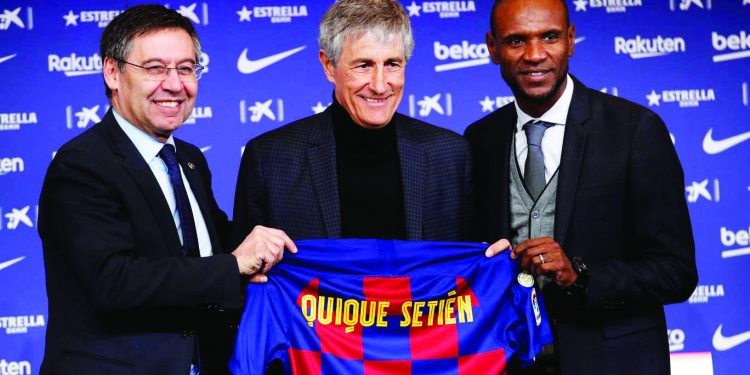 SUPER Eagles and Lille of France striker Victor Osimhen’s chances of joining Spanish giants Barcelona may have suffered a setback as new Barcelona boss Quique Setien has kept mute over the possibility of signing a new striker this month.

Setien was officially unveiled as Ernesto Valverde’s successor yesterday after signing a two-and-a-half-year deal at Camp Nou that includes a break clause for 2021.

Barcelona are believed to be stepping up their search for a centre-forward after confirmation of Luis Suarez’s long lay-off.

The prolific Uruguayan was ruled out for four months on Sunday and will miss most of the remainder of the season after undergoing knee surgery.

Though  Osimhen joins Inter Milan frontman Lautaro Martinez and Suarez’s compatriot Edinson Cavani, out of favour at Paris Saint-Germain, as potential replacements, Setien would not be drawn on the need to bolster his frontline.

“We have a lot of things to discuss,” Setien, formerly with Las Palmas and Real Betis, said when asked about signing a striker. “We haven’t seen enough to analyse it perfectly.

“I’m clear that we will always have a consensus in the decisions we make. I’m a person dedicated to the club and it’s not something I’m worrying about right now. We have an important player out but we have to think of the players here.

“The thing about it is the philosophy. We might think about making changes like switching to 4-3-3 or 4-4-2 but we need to evaluate things and find out what to do.”

Meanwhile,  Setien admits he could not have imagined landing the Barcelona job in his “wildest dreams”, with the new man at the Camp Nou helm having gone from “walking past the cows in my village to training the best players in the world”.

The former Real Betis boss has been handed a contract by the reigning La Liga champions through to the summer of 2022 .

He told reporters as his official unveiling: “First of all I want to thank this institution, the president, [Eric] Abidal and Ramon [Planes] for the opportunity they have given me to come here.

“I am somebody who is very emotional and today is a very special day for me. But, first things first, I have to thank the club and the next thing is that I’m excited about this challenge and this project.

“Yesterday I was walking past the cows in my village, now I’m here training the best players in the world.”